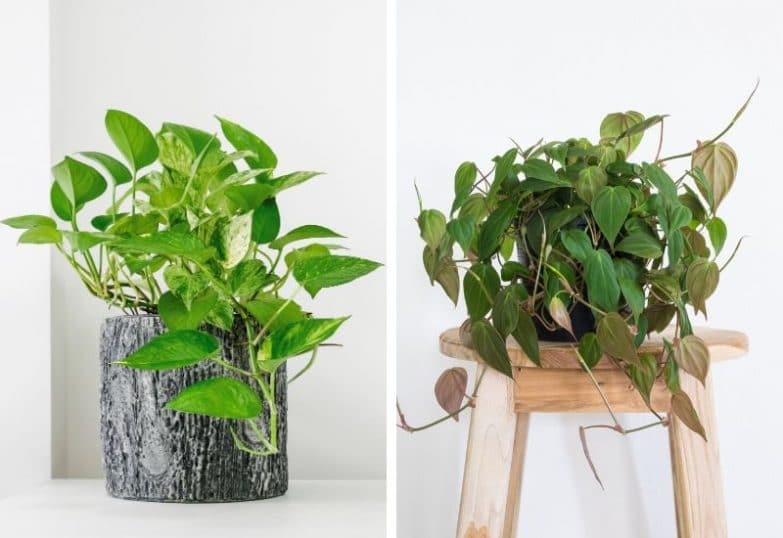 Two of the most popular houseplants, Pothos and Heartleaf Philodendron, are often confused with each other. Many growers own a plant for years before learning its correct identity – but they have important differences. It’s not actually too difficult to tell the two plants apart, and this article will compare pothos vs philodendron so you can always identify each one.

Overview Of Pothos Vs Philodendron

Unsurprisingly, these popular houseplants go by many common names. Pothos is often known as Devil’s Ivy, Money Plant, Taro vine, and Silver Vine. All these names refer to the same plant, known by the scientific name Epipremnum aureum. Although even this is confused a little further, as you will sometimes see it listed as Scindapsus aureus. This is a scientific synonym for the same plant but is not the officially accepted scientific name.

So even before we get to the appearance of these plants, you can see that identifying them by name can cause a lot of confusion. Sometimes Pothos and Heartleaf Philodendron are even mislabelled by retailers, which only adds to the confusion.

Both plants have green or variegated broad leaves on vines that can trail or climb. They grow to about the same size, too, and require similar care. Both are considered low maintenance.

Botanical curiosity is only one reason to find out the true identity of your plant. Even though they are closely related, Pothos and Philodendrons have distinct differences. Overall, a Pothos is hardier and will grow faster than a Philodendron.

The leaves of a Philodendron are usually more uniformly green than the Pothos, though each has strikingly variegated varieties.

Important differences that set them apart:

Though it can adapt to low light, a Pothos prefers bright, indirect light … and they generally want more of it than a Philodendron does. The plant doesn’t tolerate direct sun, but it can take more intensity than a Philodendron without suffering sunburn. It’s a little more drought-tolerant, too.

A Pothos can handle hot weather – but doesn’t like cold temperatures. Its roots can be shocked if it receives frigid water.

A Heartleaf Philodendron can thrive in lower light conditions than a Pothos. They hold their variegation better in low light, too.

It’s a little easier to propagate a Philodendron (though both species are easy). They are also more tolerant of cold weather. Philodendrons stop growing in a cold environment and don’t tolerate frost, but they’re less prone to stress from cooler temperatures than a Pothos.

Though they look superficially alike, the leaves of the two plants have clear differences that make it possible for an informed gardener to tell them apart with a glance. The large variation within each species can obscure these points in some cases, but checking the leaves is generally the quickest method.

Check the middle span of the leaf: Heartleaf Philodendrons are typically more rounded and heart-shaped with a longer spout-like tip. Pothos leaves tend to be more irregularly shaped with ends that are shorter and less pointed.

Philodendron leaves are thinner and have a smooth surface. The topside has an even, almost velvety feel.

A Pothos leaf is thicker and its topside is slightly raised with a bit of texture. It also has a well-defined ridge down the center midrib that a Philodendron lacks. A Pothos leaf also has the look and feel of being lightly waxed.

The leaves of a Heartleaf Philodendron have a matte-like finish that absorbs light. The waxy surface of a Pothos leaf gives off a glossy glow.

Leaf Protection: Does It Have A Cataphyll?

You’ll have to become aware of some lesser-known plant parts to use this method, but it offers surefire identification.

Philodendrons have a specialized sheath called a cataphyll. It grows from a stem node and shelters each emerging leaf.

The cataphyll is actually a modified leaf of its own. It stays on the stem for a short time to continue photosynthesis while the “true” leaf unfolds. The cataphyll eventually turns papery thin and brown before it dries up and falls off.

Pothos lacks these structures: its new leaves simply unfold from an older leaf.

Heartleaf Philodendron definitely has some quirks. One idiosyncrasy is that the new leaves are often a different color than the main plant.

Emerging Philodendron foliage can have a brownish or pink tint. This color variance is more pronounced on some varieties: a deep green mother plant may have olive-colored new foliage, or its fresh growth may come in with orange or reddish hues.

Pothos doesn’t get so fancy with its new foliage. New leaves may be a shade lighter than the original, but they don’t emerge with an entirely different color.

There are a few easily discerned differences in the petiole of the two plants. The petiole is the short stem that attaches a leaf to the main vine.

A Philodendron’s petiole is round and smooth down its entire length. It is commonly brownish or of a shade slightly lighter than its leaves.

The petiole of a Pothos has a grooved ridge that runs in parallel along the leaf stem. The petiole is a bit thicker than a Philodendron’s, too. The color is the same or slightly lighter than the foliage.

Aerial roots grow above the soil. These roots sprout from leaf nodes and can absorb moisture and nutrients – they act like little local power plants along the vining stem. They allow the plant to climb and anchor itself for support.

Both Pothos and Philodendrons have aerial roots. Note that these are aggressive roots, too – they will attach themselves to any rough surface. Keep your plant contained unless you want it to climb; otherwise, they can leave dark root marks on your wall or furniture once you remove them.

Pothos has limited aerial roots that emerge as small, thick nubs. There is one root per node.

The Philodendron’s aerial roots are more extensive and can resemble a little root system of their own. They are thinner and more spindly than those of a Pothos, emerging in groups of two to six, or even more.

Note: Aerial roots can grow long and unsightly, but don’t prune them during their high-growth period because they typically respond by multiplying. Trim them during the off season.

Sorting Out The Varieties

Don’t be confused by the many varieties of Pothos and Heartleaf Philodendron – which, predictably, often come with indeterminate names that are assigned willy-nilly by retailers. The botanical differences we’ve covered will still be applicable.

It’s helpful to know the difference between a Pothos and a Philodendron, but other closely-related species can also be challenging. The most common source of confusion is the Satin Pothos, which is actually a Scindapsus pictus, and not in the same genus as either Philodendron hederaceum or Epipremnum aureum. Although it has a lot of similarities to both Pothos and Heartleaf Philodendron, the characteristic leaf pattern of Satin Pothos is usually quite easy to identify.

While both species have variegated cultivars, Pothos has more forms. The most popular is the gold-hued Golden Pothos, but even the mostly green Jade Pothos can have cream patches. The Marble Queen Pothos features striking “shattered” variegation.

Pothos needs fairly bright (indirect) illumination to keep their variegation. They tend to revert to all-green leaves to boost photosynthesis in dim light.

Philodendrons also have a number of cultivars, but there isn’t as much variegation among them. One of the most unusual varieties is the Ace of Spades: its leaves have dark undersides that start out as reddish-orange. It looks less like a standard Philodendron than a common Pothos does! Finally, variegated forms of Philodendrons generally have crisper delineations and hold their color better than Pothos in lower light conditions.

Although quite a technical article, I hope this has helped you clarify the difference between common pothos and philodendron houseplants. It’s amazing how two plants that look pretty similar at first glance, can all of a sudden be easily identified with just a few key features.