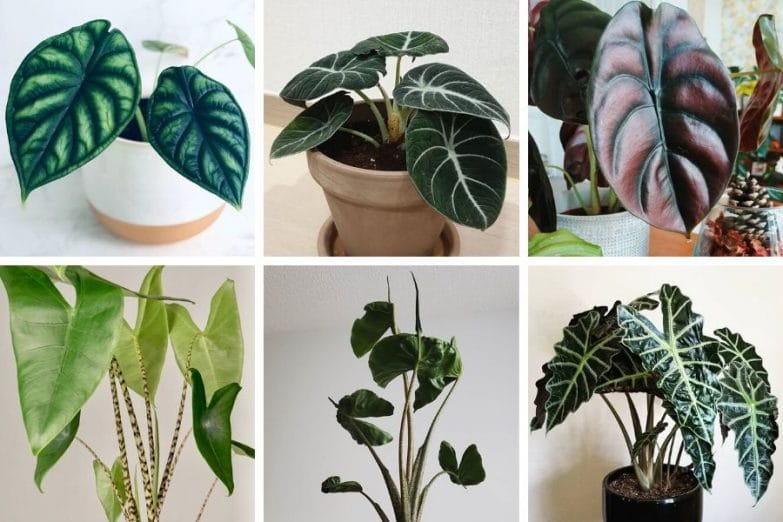 Alocasias are considered some of the most striking houseplants because of their spectacular foliage and visual appeal. Native to subtropical Asia and eastern Australia some Alocasia varieties have leaves that grow to an incredible three feet in length! Without a doubt, these plants will be a showpiece in your houseplant collection and I highly recommend you consider adding some of the many Alocasia varieties to your home!

Plants within the Alocasia genus have similar basic traits because of their genetic connection, but the individual Alocasia varieties show vast differences in color, leaf size and shape, and size. These differences and unique features of the different varieties are described below.

13 Alocasia Varieties To Brighten Up Your Home

With over 80 species to choose from, it can be hard to pick a favorite, but the following 13 Alocasia varieties boast stunning foliage in terms of texture, shape, size, and color. Any of these plants would be an amazing addition to your home’s decor. Just note they aren’t the type of houseplant that will grow if neglected; they are a little finicky and need your attention.

Where to Buy: All of these Alocasias can be bought from Etsy and delivered directly to your door. (This is where I buy most of my houseplants).

The most popular of the Alocasias, the Polly is a compact hybrid, known for its large, dark-green leaves that are shaped like an arrow or a shield. These narrow leaves have wavy, undulating edges, and are adorned with thick white veins running throughout the leaves.

Alocasia Polly grows up to 18-inches tall and wide, with leaves reaching up to 16” long. Due to its popularity, this variety is easy to find locally in stores. Occasionally, indoor-grown houseplants will flower, sending up a small, calla-like inflorescence. The flowers are often obscured by the large foliage and are somewhat insignificant (green spadix and white spathe).

The Alocasia micholitziana ‘Frydek’ plant, commonly called the Green Velvet Alocasia resembles Alocasia Polly in size and leaf shape/color, but it is a little different and much harder to find for purchase. Frydek plants have velvety (as opposed to glossy), deep-green leaves with bright white, prominent veins on the foliage; the veins, however, are narrower than those on Polly plants, appearing less prominent.

Alocasia Frydek is a medium-sized plant (in relation to Alocasia plants in general), growing two to three feet tall when mature and slightly narrower than tall. Leaves are on average 18-inches in length when fully grown.

Alocasia zebrina sports the characteristic arrow or shield-shaped leaves but is missing the distinctive white veins running through the leaves. Instead, the stilt-like stalks are adorned with yellow and black zebra print-esque markings lending to its name and giving the plant a distinctive, eye-catching appearance.

Leaves on the Zebrina are thinner than most Alocasia varieties, but they still display the bold, noticeable veins, just without the bright white markings. Alocasia zebrina grows to about 3-feet tall and spans a similar width. Read more about caring for Alocasia zebrina here.

If you’re looking for a plant that is dark and mysterious, yet stunning in its own way, the Black Velvet Alocasia should be put at the top of your list! Thick, heart-shaped leaves grow to the size of saucers and develop a deep black color and almost velvety texture accented with prominent silvery-white veins. They look regal, begging to be touched, and added to your plant collection.

Black Velvet Alocasias seldom grow taller than 12-inches in height and about 18-inches across to create a “bushier” plant than most Alocasias. The leaves are thicker than most varieties, almost succulent-like. This makes it important to let the soil for your Black Velvet dry out more than other types and ensure it has good root aeration.

I’ve written a full article all about growing Alocasia Black Velvet, covering everything you need to know. You can buy Alocasia Black Velvet online (link to Etsy). I buy the majority of my houseplants from Etsy, particularly the less commonly available plants, as they are much easier to source online.

At first glance, Alocasia Dragon Scale almost seems like something out of a cartoon or fairy tale. Opposite from the well-known Polly, this variety of Alocasia has light green or silvery-green foliage with dark green primary and secondary veins resembling large scales. The underside of the leaves are light green with reddish-brown veins.

Dragon Scale Alocasia is one of the most stunning Jewel Alocasia varieties. The exquisitely detailed leaves range in size from 4 to 6-inches. Plants will occasionally, albeit rarely when grown indoors, produce insignificant purple spathes.

Alocasia Stingray is unique in that it displays the yellow and green zebra-esque markings of the Zebrina with a completely different leaf shape. It has lost the unique arrowhead shape common with Polly and Zebrina but instead develops rounder, ribbed leaves that point upward and outward with a long, thin tail at the terminal end of each leaf. The leaves look like a stingray with the fish-like wings and tail.

Plants quickly reach upwards of 6-feet tall at full height and span a width of 3 to 4-feet across, giving plants a tall, slender appearance.

Silver Dragon Alocasia is another highly sought after variety because of its gorgeous, unusual coloration. Similar to the Dragon Scale, Silver Dragon has lighter leaves with dark, prominent venation. In this case, the highly textured, almost oval leaves are really light in color, a pale silvery-blueish with primary and secondary veins in dark green to sage-blue.

Alocasia Silver Dragon is one of the more compact Alocasia varieties. Mature plants rarely even reach 3-feet in height and width. Fully grown leaves stay small too, growing to about 6-inches in length, or about the size of your hand.

One of the largest Alocasia varieties, the Alocasia macrorrhiza is also known as the Giant Taro or Upright Elephant Ear because of its large stature and gigantic leaves. Lime green, glossy arrow-shaped leaves (without the white veins) reach an astounding 3-feet in length and are more erect on the end of the plant’s stems than the Polly or Zebrina which droop more.

Alocasia macrorrhiza plants grow up to 5-feet tall, and typically span a width of 3 to 5-feet, depending on the growing conditions indoors. These quick-growing plants make a great indoor specimen if you have the space for a large houseplant; when grown outside they are often considered invasive as they take over your yard or garden.

As its name suggests, the Red Secret Alocasia sets itself apart from the other varieties with its signature red/pink tones found on the foliage, giving it a tropical, passionate feel. Ovate, iridescent leaves emerge a soft, subdued coppery green with a pink sheen. Over time the coppery green deepens to a saturated dark green but the pink keeps its opalescence. The recessed veins are so dark they almost appear black.

Mature plants will grow to about 3-feet in height and span a similar width to create an eye-catching plant. The large, boldly colored leaves reach 12 to 18-inches in length when fully grown.

Also known as Buddha’s Hand, the Hooded Dwarf Alocasia is thought to bring good fortune and is found in Buddhist temples across Thailand and Laos. Beautiful, glossy green foliage is adorned with thick, prominent veins on the undersides of the leaves, and wavy, upturned leaf margins.

Smaller than some other Alocasia varieties, Hooded Dwarf only grows to about 3-feet tall and 3-feet wide. Thick, husky petioles hold glossy, heart-shaped leaves more upright allowing them to get about 7” wide by 12” long. This Alocasia variety is hardier than the other species and will grow in bright, indirect sun to almost full shade.

Alocasia longiloba is known for its large, slender, arrow-shaped leaves. The top of the leaves are a striking bluish green; blade margins, the midrib, and primary veins stand out in a lighter silvery-grey. But what sets this variety apart is the undersides of the foliage in their deep eggplant purple hue.

Plants are on the smaller side, growing 1 to 3 feet tall with their width matching their height. Long, narrow leaves can grow upwards of 2 to 3-feet long themselves and typically only 12 to 15” wide. Periodically flowers will erupt with a creamy white or light green spathe and bright orange fruits.

The large leaves of the Alocasia wentii can reach up to 12 inches in length, in a jeweled deep green shade with a surprising, spectacular contrasting purple-bronze underneath. Mature plants display deeper colors than juveniles; if the color hasn’t developed, give it time and you’ll see it soon enough. Oval in shape, the leaves draw into a point to create what is known as a “drip tip” along which water drips off the leaf neatly.

Alocasia wentii are a little larger compared to some other Alocasia varieties, growing to about 3 to 4 feet tall and a similar width. The huge, blistered leaves can reach up to 3 feet long to create a beautiful canopy and a striking houseplant specimen.

One look at this plant and there’s no guessing where it gets its name from. Long narrow, shiny green leaves have a sword-like appearance and are accented on their underside by coppery hue with tones of purple. The leaves on this Alocasia are much longer and narrower than other Alocasia varieties, growing upright with a scalloped leaf margin, but the large size and prominent midrib and veins make it apparent this plant is an Alocasia.

At most, mature plants will hit 4 feet in height and 3 to 4 feet across in width. Not surprisingly, the leaves grow up to 24 inches long. The unique feature about the Purple Sword though is they stay a mere 2 inches wide compared to other varieties that have leaves almost as wide as they are long.

Caring For Your Alocasia

Most Alocasia plants have the following, similar care instructions since they are closely related. It’s always recommended though, to double-check how to care for a new plant when you bring it home to make sure you give it the best conditions.