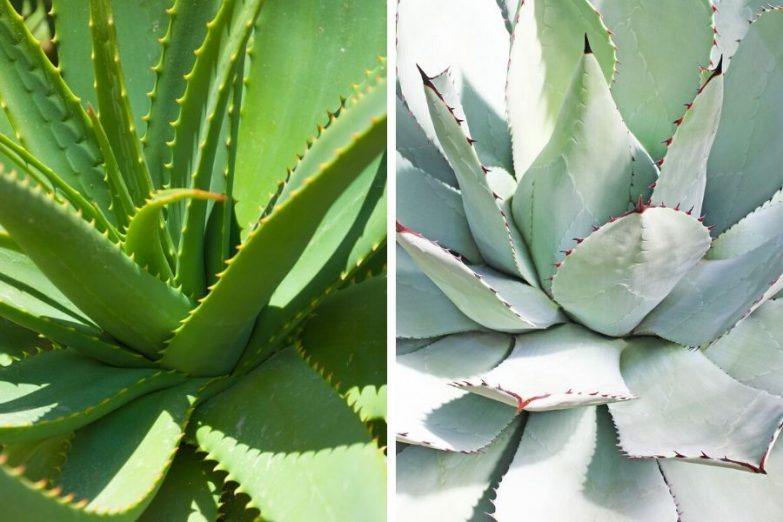 With similar looks, it’s easy to see why distinguishing between an Agave and an Aloe Vera plant, or any species of Aloe for that matter can sometimes be hard. This article will get you up to speed about Agave vs Aloe Vera so you’ll be able to tell them apart and care for both plants.

Keep reading because we take a more detailed look at both the differences and similarities of Agave and Aloe Vera plants.

Agave and Aloe Vera plants are both adapted to grow well in tropical, semitropical and arid climates. However, they are both native to different regions of the world, although the growing conditions are the same.

Agaves are native to tropical and hot, dry and arid regions of the Americas, including the Southwestern United States. Whereas, Aloe Vera is native to Africa, although with its ease of propagation through transplanting and 6,000 years of medicinal use, pinpointing an exact region is questionable at best.

Aloe Vera has a long travel history, journeying to the islands of the Caribbean and South America with Spanish explorers. The plant’s medicinal use is referenced in Greek, Roman, Indian, Egyptian and Chinese cultures and still today, it continues its journey, as friends and neighbors share Aloe Vera babies with others.

Agave (Agave spp.) is a genus of perennial evergreen succulents that are members of the Asparagaceae family, the same family as edible asparagus. Like Aloes, it’s a large family with more than 166 different species. Some common or better-known Agave species or varieties are:

Like Agave plants, Aloe Vera is a perennial evergreen succulent, and is a species in the genus Aloe spp. and belongs in the family Asphodelaceae, which is the same family Haworthia belongs. The Aloe family is quite large, with about 580 different species and hybrids and Aloe Vera is just one of the many species. Some of the more common Aloe species include:

Although Agave and Aloe Vera plants look similar, there are differences and once you know what to look for you’ll easily be able to distinguish between the two varieties.

All types of Agave plants form into a rosette made up of succulent leaves lined in sharp thorns and a sharp center margin. Although still considered a succulent, Agave leaves differ from Aloe Vera in that the inner leaf is very fibrous and not gel-like and gooey. In addition, and depending on the variety, leaf colors include green, blue-green, grayish-green and variegated or spotted in cream, yellow or gold.

When blooming, Agave plants send up a tall stalk from the center rosette that fills with small, tubular flowers. Unlike Aloe Vera plants, once an Agave blooms the mother plant dies, but the plant produces a wealth of pups.

Another difference between Agave plants and Aloe Vera is the mature size. Whereas Aloe Vera plants typically grow only several feet tall, depending on the variety of Agave, plants can grow anywhere from 1 foot to over 20 feet tall.

Like Agave plants, Aloe Vera forms into a rosette made up of thick and fleshy, green to greenish-blue leaves with some types having white speckles. The leaf margins are lined with small, white teeth. Unlike Agave leaves that are very fibrous on the inside, Aloe Vera leaves are fleshy with a gel-like substance. Additionally, plants aren’t thorny like Agave.

Aloe Vera plants bloom in summer, sending up a tall center stalk lined with yellow tubular flowers. Unlike Agave plants that die once they flower, Aloe Vera plants continue to thrive to bloom again another season. Like Agave, Aloe Vera plants reproduce with pups forming around the mother plant. At maturity, plants grow 1 to 3 feet tall.

Expert Tip:  When it comes to telling the difference between an Agave and Aloe Vera plant, it’s all about the leaves. The Agave leaves are very fibrous and thinner, whereas the Aloe Vera’s leaves are thick and fleshy. If you feel an Agave leaf and compare it to the feel of an Aloe Vera, you can instantly feel the difference in each. Aloe Vera don’t have the hard, serious thorns like Agave.

Both Agave and Aloe Vera have centuries upon centuries of multiple uses in various cultures. Even in current times, both plants still are widely utilized for their benefits.

Agave plants have four main edible parts, including the flowers, foliage, the basal rosettes or stalks, and the plant’s sap, which is called augamiel in Spanish and means honey water. The ancient indigenous people of Southwestern America used the Agave as a major source of food.

One of the best-known products produced from the Blue Agave plant is the alcoholic beverage tequila. Agave flowers and stalks are roasted or baked and the boiled or ground leaves used for dietary fiber. The fibrous material produced by the plant is used to make rope. Ancient people used the hard thorns for sewing needles.

However, it should be noted that some people are allergic to Agave sap and should wear gloves when handling the plant.

For thousands of years, Aloe Vera has been promoted as a medicinal or cosmetic plant. Aloe Vera has been used to treat a range of medical conditions. Cosmetically, it’s used in shaving creams, makeup and other beauty products, soaps and shampoo.

You can even find Aloe Vera in various food products like yogurt, various desserts and beverages. Generally, all the products use Aloe Vera as promoting good health.

The scientific evidence of the benefits of Aloe Vera is generally quite weak. Evidence is strongest for the moisturising and emollient properties of Aloe Vera on the skin (1) (2). Topical products containing Aloe Vera are generally safe and are used in many topical cosmetic and medical products.

Unlike Agave plants that are edible, when taken internally, Aloe Vera has the potential to be toxic and negatively affect the digestive system. However, the toxicity may reduced if aloin is removed during processing.

Agave and Aloe Vera are widely utilized as ornamental plants. Both perform quite well grown outdoors in frost-free climates. Additionally, smaller varieties of both plants are suitable to be grown as houseplants, although the Agave spikes on some may make you think twice about bringing one indoors.

When used as houseplants, Agave grows slower than Aloe Vera, meaning you can keep plants smaller and more manageable for longer periods. Aloe Vera is well suited as a houseplant but both plants require bright light to perform well indoors.

Outdoors, Agave and Aloe Vera plants work well used in water wise or desert gardens, as both have a high drought-tolerance. Both plants planted in mass make good barrier plants, especially with their thorny nature. Due to the thorns, you probably don’t want to use them to line a walkway. Smaller types do well in containers.

Larger growing Agave varieties make eye-catching specimens, especially when they send up their flower stalk that can last for months. Both Agave and Aloe Vera are welcome additions to wildlife or pollinator gardens, as hummingbirds and butterflies are drawn to the tubular blooms.

When it comes to growing and caring for Agave and Aloe Vera plants, both have the same requirements for hardy growth both indoors and outside. Additionally, their low-maintenance and high drought-tolerance make them a perfect choice for those wanting hardy plants that aren’t fussy.

Soil:  When growing Agave or Aloe Vera plants outside in the ground situate both in soil that drains well. If growing in a container, use a well-drained potting mix or cactus blend. Don’t grow in soil that has a tendency to remain soggy or your plants will develop root rot and die.

Container:  When selecting a container any type of material works well but make sure the bottom has drain holes. Consider the Agave or Aloe Vera’s size and use a container that won’t tip over due to the plant being top heavy.

Light:  Whether growing your Agave and Aloe Vera indoors or outside, it needs plenty of light to grow well. Light conditions that are too low produce leggy plants. Outdoors, plant in a sunny site and if growing your plant indoors, place in a sunny location.

Temperature:  Both Agave and Aloe Vera plants grow as perennials in a consistently warm outdoor location, as they don’t tolerate cold winters. Bring containers into a warm and sheltered location if you experience freezes in your locale. Indoors, situate both plants in a location with temperatures between 60°F and 85°F.

Watering: Once established in the landscape, Agave and Aloe Vera plants don’t require much water to thrive and have a high tolerance to drought. Watering every couple of weeks is sufficient. When grown in containers, both plants only require a drink of water once the potting mix has almost completely dried out. Whether grown outdoors or as a houseplant, too much water or soggy conditions will kill Agave and Aloe Vera.

Fertilizing:  Although both aren’t heavy feeders, you can fertilize outdoor plants with an all-purpose blend in spring and summer. Feed indoor plants monthly with a half-strength, water-soluble blend for houseplants.

Agave vs Aloe Vera – The Difference Is In The Leaves

Although Agave and Aloe Vera plants have such similar features, there are stark differences between the two plant types. However, and though it can be difficult distinguishing between the two, remember it’s all about the leaves.