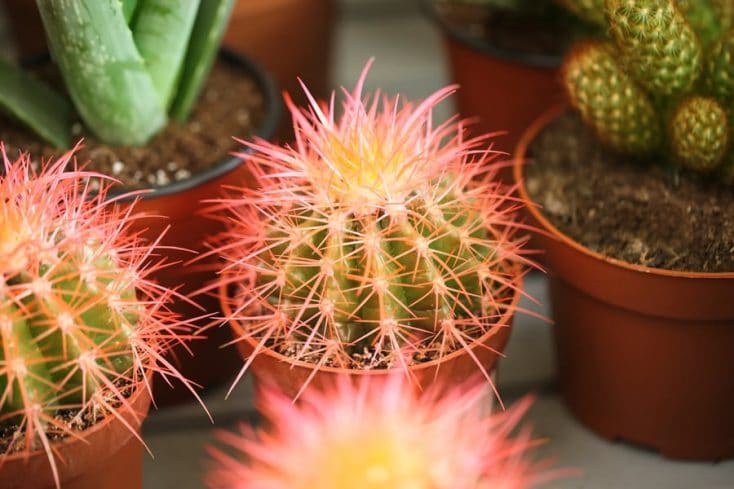 With their bold forms and textures and their brightly colored flowers, cacti make great houseplants because they are well suited to typically warm, dry indoor conditions and don’t require a lot of attention. It’s easy to grow cactus plants indoors, especially if you start out by using the right kind of potting soil.

What soil do cactus need? Cacti require a porous, sandy or pebbly potting soil that provides plenty of aeration and excellent drainage. A good cactus potting mixture will also consist of some organic material that makes moisture available to the plant roots when watered but then dries out quickly.

In this article, we will take a look at how cactus roots collect and preserve moisture in arid environments and identify the components of a good cactus potting soil, followed by a FAQ section that addresses a few common questions related to indoor potted cacti.

You are probably familiar with some of the moisture-preserving strategies of cacti, such as their succulent tissues and waxy coatings; but what about strategies developed by their root systems?

Knowing how desert cactus roots have adapted themselves to arid environments will help you understand why it is so important to use a potting mixture that will dry out quickly after being watered.

Cactus roots collect and hold water in several different ways. One way is with a cork-like outer layer that helps prevent water loss to the soil. Another way is with an extensive system of shallow roots that spread laterally away from the plant, allowing it to maximize water intake from a large area when only a few inches of surface soil is wetted by brief desert rains.

The roots of cacti are also able to quickly adapt to fluctuations in the plant’s water supply. After a rainfall, the plant shoots out new roots while the existing roots become more conductive of water.

But when there is no water available, these roots dehydrate, with the newly formed ones shriveling up and breaking away. This root shrinkage creates an air pocket that helps prevent any moisture collected by the roots from being drawn back into the soil.

The ability of cactus roots to rapidly suck up water is vital to the plants’ survival because any moisture that makes its way into desert soil is fleeting. Torrential monsoon rains often only last a few minutes, and most of the moisture that does soak into the upper layer of the ground, rather than swiftly running off, will soon evaporate into the dry air.

So, because of the way cactus roots are designed to act quickly and efficiently to collect water when it becomes available and then shrink back, they are very susceptible to rotting when they are constricted in a pot and not allowed to dry out properly between waterings.

And it’s not only the roots – storage cells throughout the plant will become dangerously oversaturated if the roots are continually soaking up water from the soil.

To create a good cactus potting mixture, you need to ensure that the soil is fast draining to prevent problems caused by root rot, oversaturation of plant cells, and any local humidity, which would not be present in a desert environment.

However, the potting medium should be able to retain the water you provide for the plant to use before drying out. And of course, your potting mixture should also meet the nutritional needs of these light feeders.

The best cactus potting soil will therefore be a nutrient-rich blend containing porous inorganic material, to ensure good drainage, along with a lesser amount of fast-drying organic media that delivers water and nutrients to the roots when they need it.

There isn’t one single cactus potting soil recipe that is perfect for everyone, as the best one for you depends on your own situation and preferences. But there are certain ingredients that work better than others.

Sand is often used in cactus potting mixtures to ensure good drainage, but larger-grained materials such as perlite and pumice are actually better for avoiding compaction of the soil and facilitating fast air and water exchange. While perlite and vermiculite are inexpensive and widely available at gardening centers, pumice (along with other types of lava rock) is longer lasting and rich in micronutrients.

Grit, gravel, and crushed granite or limestone are other inorganic materials that can be mixed into cactus soils for drainage and nutrients.

If you choose to use sand, don’t use just any sand. For example, sandbox sand is too fine, while some types of paving sands have polymer additives. Cleaned construction-grade sand (used to make cement) is a popular choice, since it’s coarse as well as inexpensive.

Regardless of which inorganic media you decide to use, be sure to rinse it well before blending it into your cactus potting mixture.

Coco coir and composted rice husks top the list of best organic media to include in a cactus potting mix. They are both long-fiber materials that provide good structure and absorb moisture well but then dry out quickly. They’re also rot resistant and long lasting, and they have good nutrient bonding qualities.

Peat moss is commonly found in potting soils of all kinds, and it is often listed as an ingredient for cactus potting soil. However, you have to be careful when using it for cacti because its water retention is so great that it may take too long to dry out, especially if you live in a humid climate or have it packed too tightly in the pot.

There are plenty of commercial cactus and succulent soils available, including some high-quality custom blends provided by nurseries that specialize in succulents that are very good.

But the cactus and succulent blends you will find in the gardening section of your local box store are not the best options for indoor potted cacti – at least not on their own, as they tend to contain less coarse inorganic material than they should for proper draining of cactus root zones.

Your cactus plants will be happier if you mix in some pumice or other pebbly material to improve the mineral content and porosity of these soils.

Can I Use Regular Potting Soil For Cactus?

Yes, you can use regular potting soil or African violet soil for your cactus plants. But again, don’t use these on their own, as they have too much moisture-holding organic matter and may contain fertilizer additives that are not geared for slow-growing cacti. Rather, use them as a one ingredient of your own DIY cactus potting soil.

How Do I Make Good Cactus Soil?

As previously mentioned, there is no single perfect cactus soil recipe. But in general, your mixture should consist of *at least* 1/3 part by volume pebbly material or coarse sand, if you are using potting soil as a base, and about 1/2 part inorganic material for mixing with fibrous organic media on its own. I like to use several inorganic materials with different particle sizes for my indoor potted cacti.

You can check the texture of your cactus soil mixture by wetting some and squeezing it with your hand. If it clumps together rather than feeling coarse and falling apart, add more inorganic matter.

How Do You Know When To Water A Cactus?

Since cactus roots need to dry completely between waterings, you need to know how to check the dryness of your plant’s potting soil.

A good way to do this is to weigh the potted plant when you know it is totally dry either using a scale or just by feel, and you can use that as a reference later. Or, just insert a wooden stick through to the base of the pot, leave it for a few minutes, and then remove it and look for signs of dampness.Read my article about how to water cacti for more information.

Should I Repot My Cactus?

Only repot a cactus if you realize that the potting soil is remaining too wet and causing rotting, the roots have begun showing through the drainage holes of its pot, or the plant has reached the edge of the pot.

It’s always best to repot plants in the springtime, if possible. And use just the next pot size up for a cactus that has outgrown its current pot, since the larger the pot, the longer it takes the potting mixture to dry out.

What Is The Best Soil For Jungle Cacti?

In this article, we’ve been talking about desert cacti, but there’s another type of cactus – the holiday cacti – that are native to Brazilian rainforests, where they are found growing attached to rocks and trees.

These cacti also require a growing medium that is well draining, but their roots don’t need to dry out completely like their desert cousins do. Potting mixture for these plants should be composed of mostly organic matter, so simply add a good portion of peat moss to your cactus soil mixture for these popular houseplants.