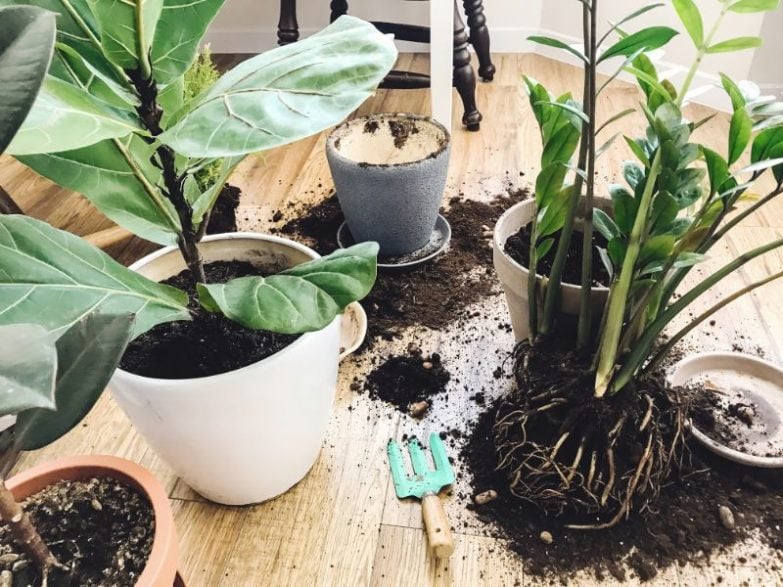 Most plants have three main components – leaves, stems, and roots – but what about rhizomes, and how do these differ from roots. This article is going to compare rhizome vs root, to help you understand their similarities and differences.

While rhizomes and roots are both found underground, rhizomes are stems that grow horizontally. Rhizomes send out stems and roots from their nodes. Many plants have rhizomes as their main stem, including ginger, calatheas, poplar trees, and bamboo.

You might be wondering what other weird and wonderful flora has such stems underground, so let’s find out which plants have rhizomes as well as the functions of these unusual stems.

As you know, plants have parts that grow above ground and below ground. The elements above ground are the stems, flowers, seeds, fruits, and leaves.

Roots and rhizomes, however, typically do their job underground and are closely connected. A rhizome is a type of stem, so let’s first look at stems to understand better what they are before contrasting them with roots.

Stems are like the masts of sailing boats, keeping plants upright and supporting the other structures of the plant. Another job stems perform is moving nutrients and water from the roots to all the other parts, including the leaves. Plants need enough water to live and do their jobs, including making oxygen for us and food for the plant.

Stems also transport the food that the leaves make through photosynthesis back down to the roots to provide the energy to do their work. Because stems have such important jobs, some have changed over time to protect themselves from harsh environments or animals that want to eat them.

Besides protection, stems have also modified themselves to create more storage space so that plants can survive even when there is little or no water.

You can also find nodes on some stems, which they use to reproduce, which means the plant does not only have to rely on seeds to spread.

Rhizomes are stems, and the main stem of the plants that have them, but these stems don’t grow upright above the ground. Instead, they grow horizontally, under the ground, or just above it. Another common name for rhizomes is creeping rootstalks or simply rootstalks.

I am sure you have seen plants that cover the ground because they grow horizontally, which is where they get the name “creeping rootstalks.”

Unlike roots, rhizomes are divided into nodes, and roots and new plants can grow from these nodes when there is enough food stored in the rhizome. The word “rhizome” actually derives from the Greek word meaning “to take root,” (source).

This means that one function of a rhizome is to store nutrients, carbohydrates, and proteins that the plant might need. You will notice that these structures are usually quite thick, and that is because they are storage units.

Another thing that rhizomes do is to help with reproduction. Because rhizomes grow horizontally, they help the plant to spread – hence creeping rootstalks – and, with enough nutrition, new plants can grow from them (source).

Rhizomes that grow on the ground include ferns and irises. Most other rhizomes are found underground, and examples of these are ginger, bamboo, and poison oak.

So, rhizomes are stems that reproduce and store food, but roots anchor a plant to the ground and function as a highway for nutrients and water. How exactly does that work? Let’s look at the types of roots and how they work to feed the rest of the plant.

There are two different types of root systems: the taproot system and the fibrous root system.

The difference is that, in a taproot system, there is one main root – it looks similar to a carrot –  and in the fibrous root system, you have a bunch of roots that are essentially the same size. Now, in either system, no matter the size of the root, most roots have a similar structure.

Unlike rhizomes, roots have a root cap on the tip of the root, which protects the soft root tip. The root tip is where new cells grow so that the root can dig deeper into the ground. The root cap also helps this movement through the ground because it is harder than the tip (source).

The rest of the root, behind the tip, is covered in a layer of tightly-packed cells, almost like skin, which is why you’ll see it referred to as “epidermis.” This is where all the magic happens. Smaller roots, or root hairs, grow from this section (source).

The job of the root hairs is to get water and minerals out of the ground and transfer it to the leaves of the plant so that they can photosynthesize.

We can summarise that roots anchor plants to the ground so that they don’t fall over, and they absorb water and minerals from the soil for the plant to survive.

But roots can also be a storage place for reserves in case plants need it in the future, just like rhizomes. A nice example of this is the sweet potato, which is a root vegetable.

As humans, we eat a lot of plants, and we also eat different parts of plants. We eat leaves, fruit, seeds, nuts, stems, and roots. But there is sometimes a bit of confusion when it comes to which part exactly we are eating.

With fruits, seeds, and nuts, it is fairly easy to understand which part of the plant we are eating. But when we move to things underground, it all gets muddled. The easiest thing to do is assume that everything that grows underground is a root, and that is where we make a mistake.

Many of us don’t realize that there are quite a few other plant structures that we find underground that are not roots.

We call plants that have storage units, or organs, below the ground geophytes, and rhizomes are only one type of underground stem. Other types include tubers, bulbs, corms, and stolons.

Garlic, leeks, onions, shallots, and chives are bulbs, which usually have layers of leaves. On the other hand, corms, also called bulbotubers, are different from bulbs because they don’t have the typical bulb layers. Oxalis triangularis is an example of a plant that grows from corms.

The potato is the most famous tuber and they are modified stems that serve as energy storage organs to keeps the plant alive during the cold winter months and helps the plant grow again in the new season.

Actual roots anchor our plants and get the necessary nutrition out of the ground for the plant to survive.

Root vegetables that we eat include carrots, parsnips, radishes, beets, and turnips. These are the thickened roots of the plants that end up on our plates.

As we have mentioned, there are also stems that grow underground, for various reasons, including rhizomes, tubers, and corms. Stolons are also a kind of stem, but they are found on the ground.

Stolons are also called runners, and the strawberry is a great example of a plant that has stolons. A stolon is like a root, but it grows from any part of the plant, even leaves. This helps the plant to reproduce faster and more widely.

The main difference between a rhizome vs root is that a rhizome is a stem and does the job of a stem, even if it works underground. New branches of the plant grow out of these underground stems, and they store food for the leaves and the roots.

Something that rhizomes and roots have in common is that both plant organs can store nutrients for emergencies and bring wonderful flavors and tastes to our cuisine and meals. But, these are two entirely different structures that exist for their own purposes in the Plantae kingdom.