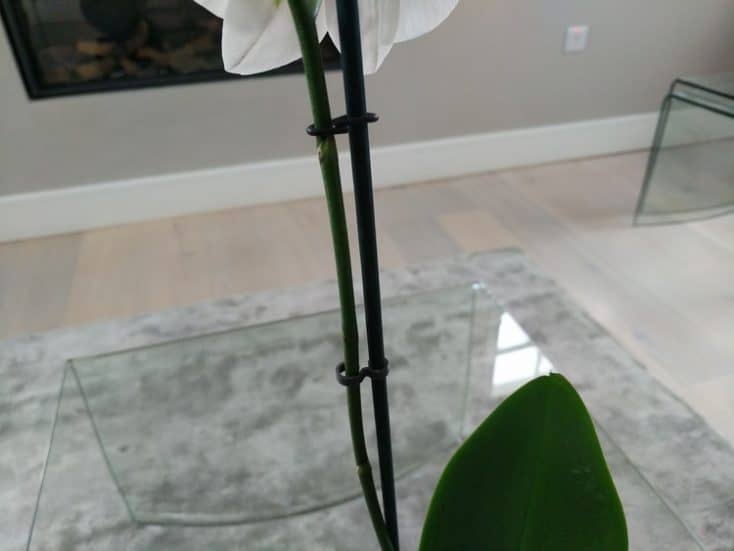 The phalaenopsis orchid is one of the most popular flowering plants in our homes, and for good reason. They bloom for months and will rebloom year after year if cared for correctly. But when your orchid sends up a new flower spike, it’s important to care for it correctly to make sure you get the most spectacular blooms. One of the most important things to do is to stake the orchid spike correctly to shape and protect the developing blooms.

How to stake an orchid – Once the new orchid spike gets more than a few inches long, insert a stake carefully into the potting medium next to the developing spike. Use clips or ties to gently secure the flower spike every few inches, avoiding the nodes on the spike. Add more clips as the spike grows and put the last clip 1-2 inches below the first bud.

Once you see a flower spike develop, you can just watch and wait until it is 4-6 inches in length. It will normally take a few weeks from first being visible to get to this size. At this point, it is time to do a little work.

How To Stake An Orchid – Step By Step

Is It An Orchid Root Or Stem?

Phalaenopsis orchids will produce increasing numbers of aerial roots over time and these will rise up from the growing medium and spill out of the pot. It’s easy to mistake a new aerial root for a new flower spike until you have seen a few of each to know what they look like.

Orchid roots have green, rounded tips, but are typically silvery grey in color along their length.

Orchid spikes are usually green in color along their length, and appear from in between the leaves of the orchid, rather than arising from the potting medium or the base of the stem. The tip of a flower spike will also have a flatter, irregular appearance, which looks a little like a tiny mitten.

Don’t worry too much either way, as you can watch and wait, to see what develops. The flower spike should become easier to identify as the length increases to 4-6 inches.

If you want to get adventurous, you could try using a curved orchid stake, to produce a more unusual or potentially more impressive orchid bloom. Using this technique, you can produce an arch of phalaenopsis blooms, which can look really impressive.

Do You Need To Stake Orchids?

Although almost all phalaenopsis orchids that you find in the stores have their flower spikes staked, it isn’t essential to do this. An unstaked spike will grow more horizontally as gravity pulls it down to the side of the plant. This is much more like in nature, where a flower spike will hang lazily out from the plant.

Most people stake their orchids as it is common practice to do this and it has a few key advantages. Most orchids are kept in small pots and the flower spikes are heavy compared to the weight of the entire plant. A spike growing out horizontally could easily topple a plant unless it was in a heavy pot.

Also, vertical spikes tend to be more aesthetically pleasing and allow you to present the orchid flowers in a way that will demonstrate their beauty most prominently. Whether you choose to stake your own orchid is up to you.

What Causes A New Orchid Spike To Grow?

New flower spikes typically form on orchids in response to lower temperatures and/or shorter day lengths. For this reason, I always move my phalaenopsis orchids to a cooler location after they have finished blooming, to try to stimulate the next flower spike to form.

Phalaenopsis orchids naturally produce flower spikes in late autumn and winter for this reason, but regardless of the time of year, you can artificially reduce the temperature for an indoor orchid to encourage it to bloom.

How Long Does It Take For An Orchid Spike To Grow?

Orchid spikes develop quite slowly, typically over the space of 2-3 months. The rate of development depends on two main factors. Temperature and light.

Increased light increases the capacity for the plant to photosynthesize and generate energy which can be used to grow the new flower spike.

Likewise, higher temperatures increase the metabolic rate of an orchid and can accelerate the rate of flower spike development.

Be aware though, that this is a double edged sword. Phalaenopsis blooms typically last longer in cooler conditions due to the reduced metabolic rate, so bear this in mind if you want to enjoy your beautiful orchids for as long as possible.

Why Do Some Orchids Have More Flowers Than Others?

There are two main factors at play here.

The first factor is genetics. Some orchids are just born to have loads of flowers on their spikes. The genes of other individual plants may have far fewer.

The second factor is the quality of care. All living things thrive when their care needs are met, and orchids are no different.

If an orchid receives less light, water, heat and fertilizer than it needs, it will produce fewer blooms on its flower spike, even though it may have the genetic capability to produce more. So, if your orchid isn’t producing many flowers this time, make sure you are providing all the things it needs to be happy.

Equally, when purchasing an orchid, make sure to pick one with lots of blooms, because if it has produced so many blooms once, it will be possible for you to reproduce this in the next blooming cycle if you provide really good care.

The reality is that most commercially produced orchids are kept in ideal conditions, and it is difficult, but not impossible to make them bloom as profusely as they did when they were first purchased.

How Long Does It Take An Orchid To Rebloom?

A phalaenopsis orchid will normally take about 6 months from the end of the last blooming cycle until a new flower spike starts to develop. The timescale will vary depending on the conditions the orchid is kept in and how well cared for it is.

Do You Cut Off Dead Orchid Stems?

You should not cut a flower spike immediately after an orchid has finished blooming. Instead, wait until the top section of the flower spike turns brown, then cut it just above the 3rd or 4th node. By doing this, the flower spike may produce a lateral spike from one of the nodes, leading to another crop of blooms.

Please check out my other articles about orchid care. I have a particular interest in phalaenopsis orchids and have loads of useful information on the orchid section of this website.