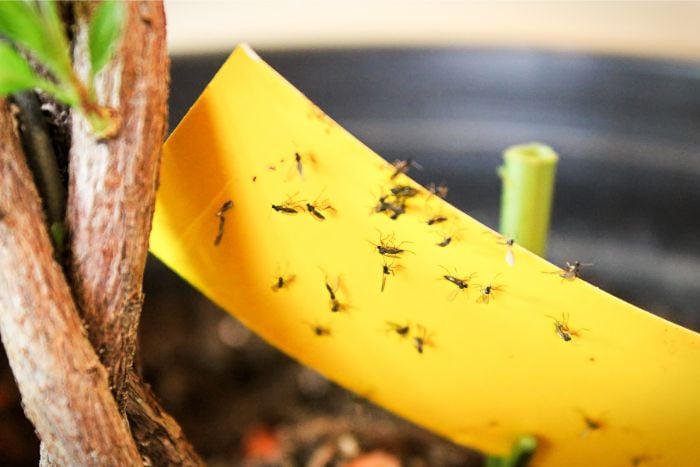 Fungus gnats are the tiny black flies that you see buzzing around your indoor plants. There’s nothing fun about them at all, and getting rid of fungus gnats in houseplants can be a bit of a challenge. Thankfully, I’ve got some great tips to help you banish these annoying little bugs for good.

While adult fungus gnats are fairly harmless, the larvae can cause damage. Larvae feed on algae and fungi most of the time, but they can feed on plant roots within the soil too, which can lead to root damage and stunted growth. It’s best to get rid of fungus gnats as soon as you notice them. Read on to learn how to effectively get rid of fungus gnats in indoor plants, and how to prevent future infestation.

What Is A Fungus Gnat And How Do They Get In Houseplants?

Fungus gnats are not very big at all. In fact, they only grow to around a quarter of an inch in length. You might think that they are too small to cause much damage at all, but unfortunately their larvae can and will damage your plants.

Fungus Gnats are part of a family of insects that include Bolitophilidae, Diadocidiidae, Keroplatidae, Ditomyiidae, and Diptera. Fungus gnats thrive in moist environments and typically seek them out. Naturally, they are found in damp forest areas and typically feed on mushrooms and decaying plant matter.

Fungus gnats do not hibernate in winter like other insects do, which means that they can be a problem all year round.

As gnat larvae like decaying plant material and algae, they seek out damp environments. Fungus gnats are attracted to the following:

If this sounds familiar, it is time to get to work making your home and garden a less gnat-friendly environment.

An organic way to test for fungus gnat larvae is by using a slice of raw potato. Push slices or wedges of potato onto the surface of the soil and leave them there for a few days. The larvae will start feeding on the potato on the underside of the slice/wedge. Turn the wedges or slices over and see how many larvae have made their way to it. You can use several slices to draw gnats out of your soil.

How To Identify Fungus Gnats

How do you know if your plant really has fungus gnats? After all, they look very similar to small mosquitos or black flies.

It isn’t too difficult to tell if your house plants have fungus gnats. The first and most reliable way to tell is by inspecting the soil thoroughly. If you happen to notice that there are some black flies or insects hovering around your plants, that is a good sign that you have a fungus gnat infestation.

Of course, not all insects and bugs are fungus gnats, so you might need to verify that they are in fact fungus gnats by looking for other tell-tale signs.

Some other ways to identify fungus gnats include the following:

When fungus gnats eat the roots of house plants, they typically damage the plant’s feeding system. With damaged roots, the plant cannot get nutrients and water up to the leaves and the rest of the plant. When this happens, the leaves start to turn yellow and fall off.

If your plant has yellowing leaves, check the soil for fungus gnats and inspect the roots for damage. You might be able to save the root system if there are still some healthy root sections left.

6 Ways To Get Rid Of Fungus Gnats

If you have a fungus gnat infestation, there is a number of things you can do to rectify the situation. Below are a few ways of getting rid of fungus gnats, as listed above.

1. Use A Hydrogen Peroxide And Water Solution To Get Rid Of Fungus Gnats

3% Hydrogen Peroxide is an effective substance for controlling larvae. To get rid of fungus gnats, mix a solution of 1 part of hydrogen peroxide with 4 parts of water.

You should only water your house plant with this solution when the top of the potting medium is dry. When you pour the peroxide solution into the soil, you might hear an effervescent sound.

Once the peroxide has done its job of killing the gnat larvae, it will break down in the soil. It is completely harmless to your plant. While it should work first time around, you might need to repeat the process.

2. Allow The Potting Soil To Dry Out To Get Rid Of Fungus Gnats

As fungus gnats are attracted to damp environments, it is important to ensure that your house plants potting medium is not always wet or damp. It is tempting to water house plants frequently, but you might not be doing your plants any favors if your watering frequency is attracting insects.

If your plants are constantly watered, the environment becomes prime real estate for mold and algae to grow. And by now you already know that mold and algae are two things fungus gnats love. By allowing the top 2 inches of soil to get completely dry between watering, you can create a soil environment that is not fungus gnat friendly.

Before you water your house plants, feel the surface layer of the plant. If it is wet or damp, do not water. If it is dry, you can water. Female fungus gnats specifically seek out soil that is consistently wet. Drying soil deters eggs from hatching into larvae.

If you have larvae infested soil and do not want to kill the gnats, you can always repot the plant in fresh soil with good nutritive value. Remove the house plant from its container and discard the infested soil. Make sure that you rinse off the roots or shake excess soil from the plant.

All plants have their own sensitivities, so it is important to look up how to best repot the plant you are working with. Once you have cleaned out the container, you can repot the plant.

Make sure that there is no decaying plant matter in containers or near your newly potted plant as fungus gnats can easily spread. Also, be careful to only water the plant as required and not to keep the soil soaked as this will just keep attracting fungus gnats.

You can use sticky yellow fly trap cards to catch fungus gnats in your houseplants. This is a reliable method to use if you are dealing with an abundant population of gnats. Adult fungus gnats are naturally attracted to the color yellow, which is why fly trap cards are often yellow.

You should be able to find a sticky yellow card product called Gnat Stix online and in local nurseries and stores. To use this method, simply place the sticky cards beneath the canopy of the plant’s pot.

As the gnats make their way towards the yellow card, they will get trapped in the sticky area. This helps to reduce next-generation larvae populations.

5. Apply Insecticides To Get Rid Of Fungus Gnats In House Plants

Many house plant owners want to sort the problem of fungus gnats out as quickly as possible, with insecticide. Different insecticides will be required for the adults and the larvae as they respond differently to treatments. New adults are usually born on the surface of the potting soil, so it is best to apply the insecticide to the soil’s surface.

There is no need to spray the insecticide onto the actual plant as the gnats typically infest the soil and head for the roots and the algae in the soil.

You can choose to use a mild or natural option such as Neem Oil or dish soap, but they are not as effective on fungus gnats as some other commercial options.

If you are looking for highly-effective and reliable insecticides for getting rid of gnats not just immediately, but long term, look for products that contain permethrin, bifenthrin, cyfluthrin, and lambdacyhalothrin.

6. Use A Biological Control Agent To Get Rid Of Fungus Gnats In House Plant Soil

When used to get rid of gnat larvae, they are poured onto the soil in a solution. The roundworms then set to work destroying the fungus gnats in a fairly disturbing way.

The microscopic worms enter the gnats via the mouth, breathing pores and other orifices and release bacteria that actually digest the gnat from the inside out. It can take up to 4 days for this method to be effective in getting rid of fungus gnat larvae. For all intents and purposes, the fungus gnats are attacked and devoured by these microscopic round worms.

How To Stop Fungus Gnats Spreading To Other House Plants

Fungus gnats like to spread from plant to plant. This means that if you have one infested house plant, you run the risk of infecting all the other house plants in your home too.

Start treating your infested plants immediately and consider carrying out the same treatments on your other plants. This can serve as a preventative step, just in case larvae or eggs have found their way into their containers.

How To Prevent Fungus Gnats

Fungus gnats are not a problem you have to deal with only after they have made an appearance. There are things that you can do to prevent them from infesting your house plant’s soil in the first place. Below are a few pointers to help you prevent fungus gnats and keep them at bay.

Keep Plant Debris To A Minimum

If you notice debris that has fallen from your plants lying in or around the pot, clear it away. These include leaves, flowers, fruit, sticks, and similar. Potting soil that contains compost such as bark should also be avoided as these can trap moisture and include decaying organic matter which is very attractive to the fungus gnat.

Be Careful To Avoid Overwatering

Good drainage is your friend when it comes to keeping fungus gnats at bay. If your plant containers are consistently damp, fungus gnats will find their way to it and make themselves at home.

Do not overwater your plant and if you find that the soil itself does not drain well, add some perlite to the mix to help with absorption and drying out.

When you do water your plants, make sure that no water is left in the saucer beneath the pot. Empty these out no more than 30 minutes after the plant has been watered.

Plan your watering schedule carefully. Follow the care instructions for your plants and avoid watering until the soil is suitably dry. You can push your finger into the soil to feel if it is dry enough before watering. It is quite important to keep the top layer of your potting soil dry as this will deter fungus gnats from laying their eggs.

Getting rid of fungus gnats can be tricky, but with these tips, you should be well on the way to getting rid of them. A lot of the process of keeping fungus gnats at bay is your watering schedule. Adjust that and you shouldn’t be pestered by these bugs at all. Make sure that you are creating a living environment that is ideal for your house plant and not the pests that seek to destroy it.