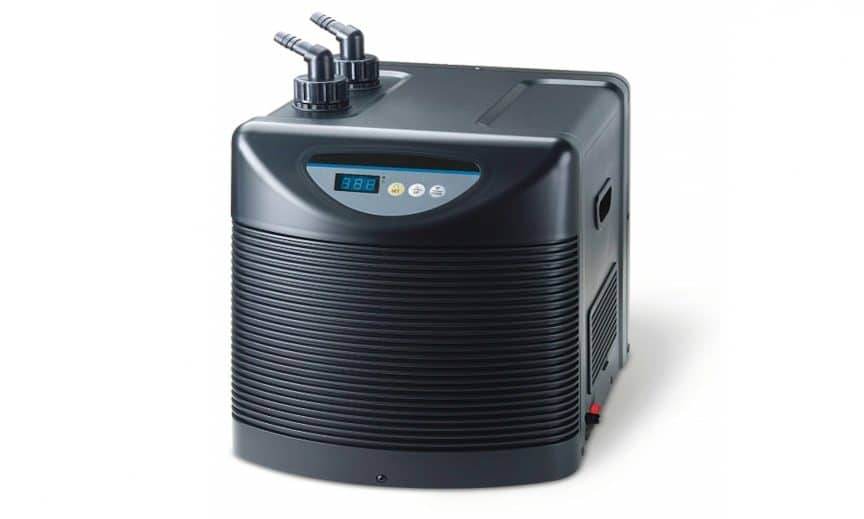 Plant roots have evolved and adapted themselves to the cool temperatures of soil substrates. Therefore, the roots of plants in hydroponics should be similarly cool. This is done by regulating the temperature of the water-based nutrient solution that’s delivered to the root zone.

But maintaining the right temperatures can be challenging for hydroponic systems that include lights, pumps, and other equipment that may put off heat, raising the ambient heat of a grow room, which will increase the water temperature of the reservoir – especially in deep water culture (DWC) systems. To contend with this problem, a water chiller for hydroponics can be a great solution.

What Is A Hydroponic Reservoir Water Chiller?

The most common type of water chiller for hydroponics is a refrigeration unit that works with a water pump located inside the reservoir. The pump sends the nutrient solution through tubing to the unit, where the liquid is chilled by cooling coils before being recirculated back into the reservoir.

Another type of water chiller that’s great for small reservoirs is a solid-state thermoelectric cooling system. These chillers have a probe that’s inserted into the reservoir, which chills the liquid by removing heat and radiating it away with a low-speed fan.

What Is The Best Water Temperature For Growing Plants With Hydroponics And Why?

There is no single water temperature that’s best for growing plants with hydroponics. Since the best temperature for the root zones of different types of plants varies, with warm-weather and tropical plants preferring higher temperatures than cool-season and temperate zone crops, you should try to keep your nutrient solution within a range of temperatures that promote optimal plant health, depending on what kinds of plants you’re growing.

A temperature range of 68-72 °F (20-22 °C) is a good guideline for hydroponics beginners because it’s ideal for easy-to-grow plants such as lettuce and other leafy greens. However, you’ll see optimal temperature ranges cited by hydroponics experts that go up to 75 °F (24 °C) and even a bit higher to accommodate a larger variety of plants.

Although straying a few degrees outside the ideal parameters for different types of plants won’t kill them, it may cause some of the plants to become stressed.That’s why many hydroponics growers set up separate systems, each containing similar type crops. Just know that you risk causing real harm to your plants if you allow your water temperature to go below 60 °F (16 °C) or above 80 °F (27 °C).

Unless you’re growing outdoors in a cold climate or someplace else where temperatures dive down toward freezing, the only real danger of allowing your nutrient solution to become too low is that it will slow down plant metabolism and stunt your plants’ growth. But if you do need to raise the water temperature of your hydroponic system, a simple aquarium heater will probably do the trick.

High water temperatures, on the other hand, are far more problematic in hydroponics. Water temperatures that are too high will cause numerous adverse conditions, including heat stress, an increase in the rate of root tissue respiration, and the proliferation of harmful bacteria, fungi, and other pathogens.

In addition, as the temperature of the solution increases, it becomes less able to hold dissolved oxygen, which plant roots need for cell respiration – the means by which they get the energy to draw in water and nutrients for the entire plant – so higher temperatures cause stress in plants.

The real problem with excess heat in hydroponics is that things can quickly snowball, if you’ll pardon the expression, due to a series of negative feedback loops where higher heat causes root tissue to respire at a faster rate, causing roots to use up more of the dissolved oxygen in the solution, which is being further depleted of oxygen because of the heat, thus causing stress to the plants, which weakens them, leaving them more vulnerable to the pathogens that have been multiplying in the high-heat, low-oxygen environment.

Why Should I Use A Water Chiller For Hydroponics?

As you can see, it’s very important to avoid high water temperatures in hydroponics. Having a water chiller for DWC systems is particularly important because they tend to heat up faster than systems that circulate the nutrient solution. If you’re using a drain and flood system, you may need to chill both the water and air maintain healthy root zone temperatures and avoid shock.

And regardless of the type of hydroponic system you are using, you may want to have a water chiller if you are concerned about summertime heat as well as if your reservoirs are small, since smaller volumes of water heat up faster than larger volumes.

What Are The Advantages Of Using A Water Chiller For Hydroponics?

Although a water chiller isn’t the only way to keep hydroponic nutrient solution cooled, it is the most efficient and reliable method of providing the right temperatures for plant roots. Trying to keep the water temperature down without a chiller requires constant vigilance and can lead to other problems, such as diluting the nutrient concentration or causing shock to your plants.

What Are The Disadvantages Of Using A Water Chiller For Hydroponics?

The main disadvantage of using a water chiller for hydroponic growing is the cost up front. Also, to run efficiently, water chillers require regular maintenance, although it’s minor, compared to all the hassles of constantly monitoring and manually maintaining cool reservoir temperatures. Additionally, this electrical equipment is not safe to use outdoors or in tight spaces with insufficient ventilation.

Other Ways To Keep Your Hydroponics Reservoir Cool

Here are a few ideas for maintaining those optimal cool temperatures that will help keep your hydroponic plant roots happy, healthy, and growing strong:

Size and Color Of The Reservoir

Chilling The Reservoir By Other Methods

How Do I Pick The Right Size Water Chiller For Hydroponics?

The amount of heat removal capacity you need for your hydroponic system will depend on how large your reservoir is, how hot your grow room or garden gets, and the optimal water temperature at which you need to keep your reservoir.

The best way to determine what size water chiller you should purchase is to scour the owner’s manuals for the recommended or maximum water capacities listed for each unit, which you’ll find in the specification tables. There, you will find the key information you need, such as the ambient temperature, temperature to which the water was chilled, and the volume of water chilled, that were used to define the rating for each different module.

There is a way to precisely determine the BTUs (British thermal units) per hour your system needs according to the three metrics mentioned above; however, manufacturers don’t rate chillers according to BTUs so much anymore. So the owner’s manuals or instructions for unit will give you important information that you can use as a guideline.

Or, you can simply read through the hydroponics chiller review that follows, where the reservoir capacities corresponding to each horsepower (HP) unit are listed for each of the chosen water chillers:

What Are The Best Chillers To Buy For A Hydroponics System?

The best water chillers for hydroponics are engineered using state-of-the-art technology to be small, quiet, efficient, reliable, durable, easy to use, and safe for use with hydroponic nutrient solution, as well as being competitively priced.

When considering refrigeration chillers, make sure it has an anti-corrosive titanium heat exchanger that won’t leach metal contaminants into your nutrient solution. You should also look for units with high-tech features such as a microcomputer control system, LCD display, and temperature memory, as well as safety features that will prevent the unit from overheating. Note that these units require a water pump and tubing that you’ll have to purchase separately.

And a note of caution: apparently, there are knockoffs of many of these chillers coming out of China, so make sure to purchase one from a reputable supplier.

Active Aqua Chiller with Power Boost line of water chillers are the latest offering from Hydrofarm, will the new models having a boost function that promises accelerated chilling to the desired nutrient solution temperatures. Active Aqua is an established brand that’s popular with hydroponics growers because the units are easy to use and reasonably priced. Here are some of the features:

Note that their refrigeration performance ratings specify that the chillers obtain best efficiency with higher reservoir volumes than what they market their units for. Check the current price and read reviews for the Hydrofarm Active aqua Chiller on Amazon.

These little thermoelectric chillers by Novatec are made for aquariums, but they’re a great option for small reservoirs, since they’re quiet, reliable, efficient, and very inexpensive. They work by directly converting electricity into cooling power through their solid-state thermoelectric cooling system and will continuously chill your nutrient solution as long as they’re turned on, providing 50 watts of cooling power.

Since the modules are attached to the reservoir, with the probe immersed in the liquid, they don’t require a pump or any tubing. And while they have the capacity to cool 10 gallons of water 6-8 °F below the ambient air temperature, two chillers will draw heat down by 10-12 °F – a good option, since they’re so expensive.

Their drawbacks are that they’re only good for small reservoirs; you may need to drill holes in your reservoir to mount them, if you’re unable to suspend them from above; and the temperature controllers for these units are sold separately.

EcoPlus Chillers are another line of water chillers that are manufactured specifically for hydroponics, and they have a great reputation for their efficient and reliable compressors.

EcoPlus offers the following three water chiller models, which are rated in an upfront manner that gives you either the recommended or the maximum water capacities for each while noting that lower water volumes as well as lower water and ambient room temperatures will increase their efficiency:

As with most refrigeration-type water chillers, EcoPlus’ water chillers require a water pump and tubing, which you have to purchase separately.

As leader in aquarium equipment, Hamilton Technology Corporation offers the Max-Chill Titanium Aquarium Water Chiller series, with five chillers that pose as strong competition against chillers being produced by manufacturers in the hydroponics industry. Features include:

Here are the capacity ratings for the Max-Chill modules:

These chillers also require the purchase of a water pump and tubing.

The maximum aquarium water capacities of each model are as follows:

These chillers also require the purchase of a water pump and tubing.

The JBJ range are my personal favorite choice of water chiller for hydroponics. It’s what I personally use and other customer’s reviews seem to be equally positive.